“This news came like a bolt from the blue sky,” said a father who burst into tears as he collected his daughter’s body from a morgue in the nation’s capital.

resident Yoon expressed condolences to the victims and his wishes for a speedy recovery to the many injured in one of the South Korea’s worst disasters and the world’s worst stampedes in decades.

“This is truly tragic,” he said in a statement, vowing an investigation into the cause of the disaster. “A tragedy and disaster that should not have happened took place in the heart of Seoul last night.” 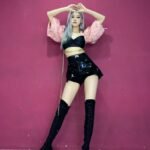